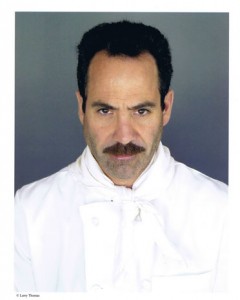 LAS VEGAS (March 5, 2013) – Who turned just 6 minutes of screen time into one of the most iconic roles in TV history?

If you guessed actor Larry Thomas, you’re a winner – just like the 250+ industry retailers who will visit the Sweet Deal Distribution booth during the 2013 Industry Summit. While the Emmy award-nominated “Soup Nazi’’ won’t be serving piping hot broth to Summit attendees, he will be signing and personalizing photos for Sweet Deal Distribution’s clients and business partners during the March 17-20 sports card and collectibles trade conference.

Thomas’ appearance on Tuesday, March 18 will be one of several Sweet Deal activation opportunities during the Summit, according to owner David Bronson. The Los Angeles –based wholesale distributor is also planning a refreshing instant-win element, where Summit retailers will have the chance to win unopened boxes from Topps, Panini and Press Pass as well as Yugioh play mats from Konami.

“Our goal at Sweet Deal is helping each of our retailer clients become more successful – and we intend to communicate that in a very meaningful way throughout this year’s Summit,’’ Bronson said.

In addition to its retailer-focused promotions, Sweet Deal has aggressively supported the Summit’s Retailer Scholarship Program by bringing more than 20 brick-and-mortar store operators to this year’s trade conference.
For more information on Sweet Deal, check out the company’s all-new website at www.sweetd.com