In addition to a pack of 2013 Press Pass Rookie Football, each qualifying retailer will receive a blind-wrapped one-card pack containing a Summit-exclusive base parallel card of Smith, Barkely, Te’o, Lacy, or Lattimore that features an “Industry Summit 2013” foil stamp. Press Pass is creating three blue foil-colored versions of each player’s promotional card, sequentially numbered to 35, 15 and 1 – and will also randomly insert an exclusive autograph card (#’d 1/1) of each of the five players among the blind-wrapped packs. 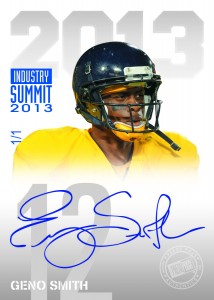